HITOMI, an art installation by a graduate, at LOOP Festival

Loop Barcelona, a world reference in the video art sector, will host this year an audiovisual piece and an installation produced by ESCAC.
19.10.22 - Escac talent,

HITOMI is an audiovisual piece integrated into an art installation for LOOP Festival Barcelona at Lab 36 gallery. Created by graduate Victoria Ioudina and produced by fellow graduate Kairo Urban, HITOMI is an immersive experience combining art installation, video art and short film about the extinction of cinema, space.

The installation is open to the public from 8 November to 22 December, at the gallery Lab 36,  located at Trafalgar 36 in Barcelona. 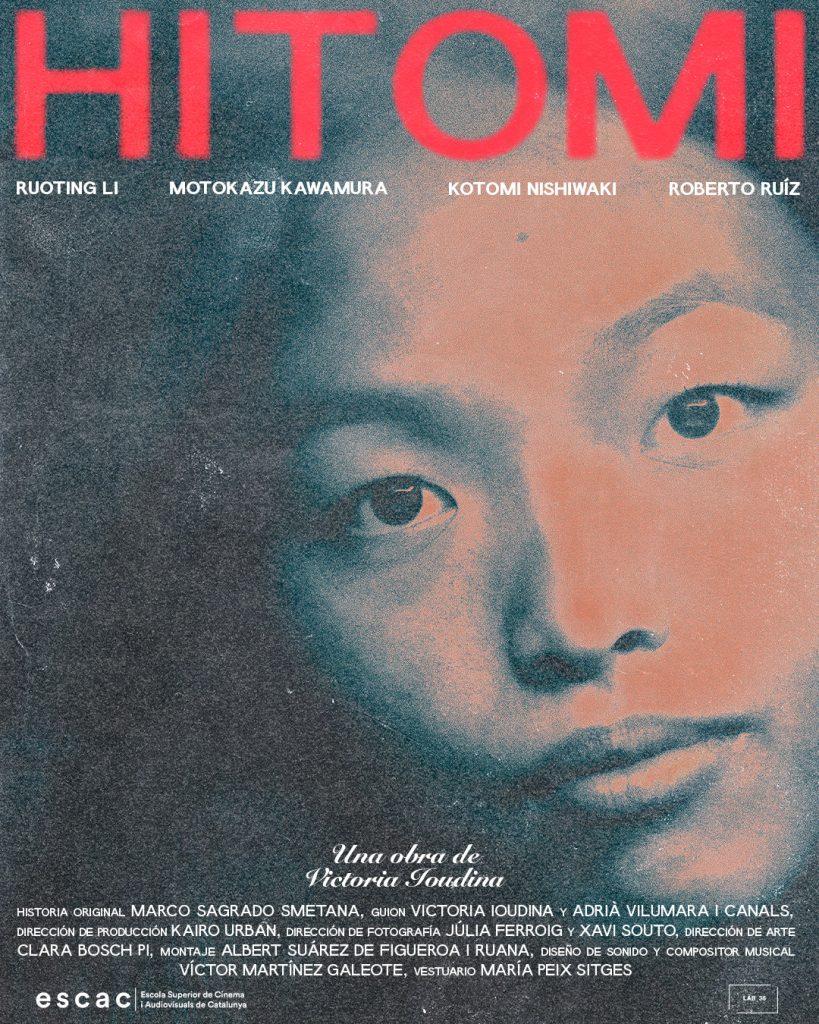 Hitomi has run away from home to take refuge in the last existing but abandoned cinema of the city, as her mother is about to lose her eyesight and wishes for her to go to a cinema before it becomes obsolete. In the meantime, her father is looking desperately for her through the streets of Barcelona.

Within the cinema, Hitomi will conduct a personal introspection through the screen, revisiting her most intimate memories, represented as dreams. These images coming from the protagonist’s subconscious will be projected onto the screen by a strange man, who is part of the theatre and using his last ounces of energy to do so, possibly for the last time.

HITOMI (Japanese: . . Pupil) is an art installation, consisting of a depiction of an abandoned deteriorated old school cinema. Within the reality of the piece, the theatre is a historically distant space for us, as it has fallen into oblivion… as if it consisted of architectural remains that could only be remembered in a museum or art gallery.

In this space a hybrid between the video art and the short film that is part of Hitomi is going to be projected. The ensemble symbolizes the idea of experiencing a half-functioning theater in ruins to convey a ghostly sensation to the people who visit it. That is to say, there is no longer a cinema, but once inside, it starts to function again until the moment where everyone leaves, and it once again becomes an abandoned ruin. The aim is for members of the public to feel like the last spectators in the space, as well as being the final (or last) gaze so to speak, so as to generate in them a possible reflection.

Victoria Ioudina, born 1999 in Barcelona, is a film graduate of the university ESCAC (University of Cinema and Audiovisuals of Catalonia). In 2022 she made her debut as a director with Hitomi, a project consisting of a hybrid between a short film and a video art piece integrated into an art installation. In 2021, Victoria was part of the short film The Silent Cry of the Trees as production director. This film is her Final Degree Project and is notable for being filmed in a vertical format. The short film is currently in distribution.

Victoria’s goal as an audiovisual creator is to find new ways of viewing and making films, as well as, to share her aesthetic sensitivity through interactive art.

HITOMI, an art installation by a graduate, at LOOP Festival

The second edition of the Maremagnum Film Fest is here!